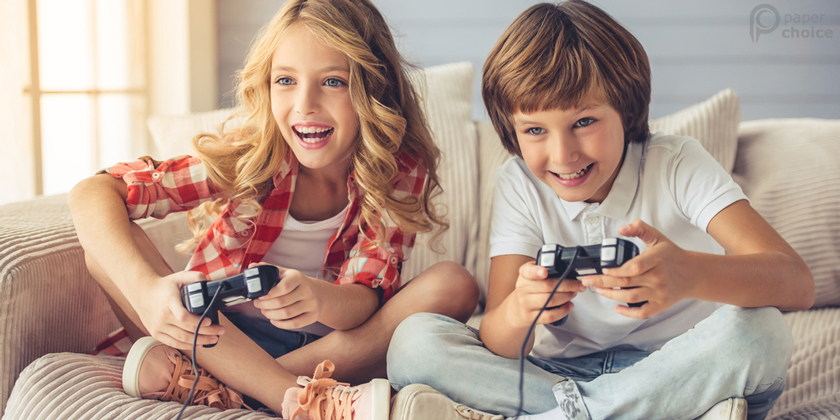 There is a tendency for more and more individuals to choose video games as a way to spend their evening (or a day. Or three months in a row). After all, more and more parents and teachers find themselves thinking if it is good for the teenagers and the youth to dive into the virtual life with all the threats hidden within, as most of the stories involve violent activities like boxing, beating up and even killing.

"Do violent games influence people so they are more aggressive?" is a question your teacher asked you to write an essay about, and here are a few hints to help you through.

Are You For or Against?

First and foremost, you have to decide on what you think about the problem and why. Are you a gamer who simply has not noticed any negative effects? What about the facts? Look up for the evidence, as a few accidents took place, being a result of games influence.

Do you think there must be some kind of a predisposition to commit violent actions and it would develop anyway? Or do you think that a person enjoying playing violent video games is a warning to the society already? No matter how raw your ideas may seem, they are precious just because of being your own thoughts and you should use them while working on the paper.

Creating and sharing a survey online is a simple thing to do, and it can serve you two goods at the same time. First of all, in case you are not sure about your opinion, other people's thoughts can be of a great help to know what to write about. Secondly, it is additional work, and it may show that you are treating your assignment seriously.

Make sure you have asked a lot of various questions, so the final results appear to be a good basis for the paper.

After you have done the research and are sure of your point, it is time to plan on how to make the paper flow logically and smoothly. You may use the questions for the survey as a plan. Mention what is supposed to be the strongest evidence from the very beginning.

You are free to tell the story you know from your own experience, as well as you can share the feelings you have while playing the games. Also, remember to use proper language and constructions. Even a simple statement like "I do not want my kid to kill pixel creatures" may sound convincing if put in with a smart language.

Reread the freshly written essay in a few hours to find out if it seems convincing for you and whether you have to work some more on it. If no more polishing is needed, congratulations: you have a great "Do violent games cause behavior problems" opinion essay!

Nowadays we are all acknowledged with the debates around an issue on the impact of video games on the children’s behavior. The start of them can be dated back to the early 1976 when the first video game claimed as “containing violent scenes” has been released.

Already in 1993 after the release of Mortal Kombat and Night Trap Dan Lungren, an Attorney General in the city of California, stated that violent video games teach young and very impressive kids to desensitize the value of violence.

Alone in the U.S. some shockingly abusive youth crimes take place in high schools, what to say about the future of those kids in adult life. However, as some scientists claim that the rate of aggression does not straightforwardly influence the rate of child’s violent actions in life, we have decided to indulge into this issue and research it more precisely.

Quite a surprising finding but violent video games also have they advantages and disadvantages in life of children as a prevailing part of gamers which are to state here for your essay.

So, what can we do to prevent popularization of such content among young generation? Parents also should be savvier in their choices when buying new classy action video games on demand of their children just because “my friend has it and I want it too”.

The sales of video games are predicted to bring an income of $102.9 billion in the year of 2017. And the games of 2017 are even more realistic than the previous ones so it may be even harder for children to see a difference between violence cases real life that are strictly prohibited and fantastic world of freedom where them may beat and murder everyone they want without any consequences.